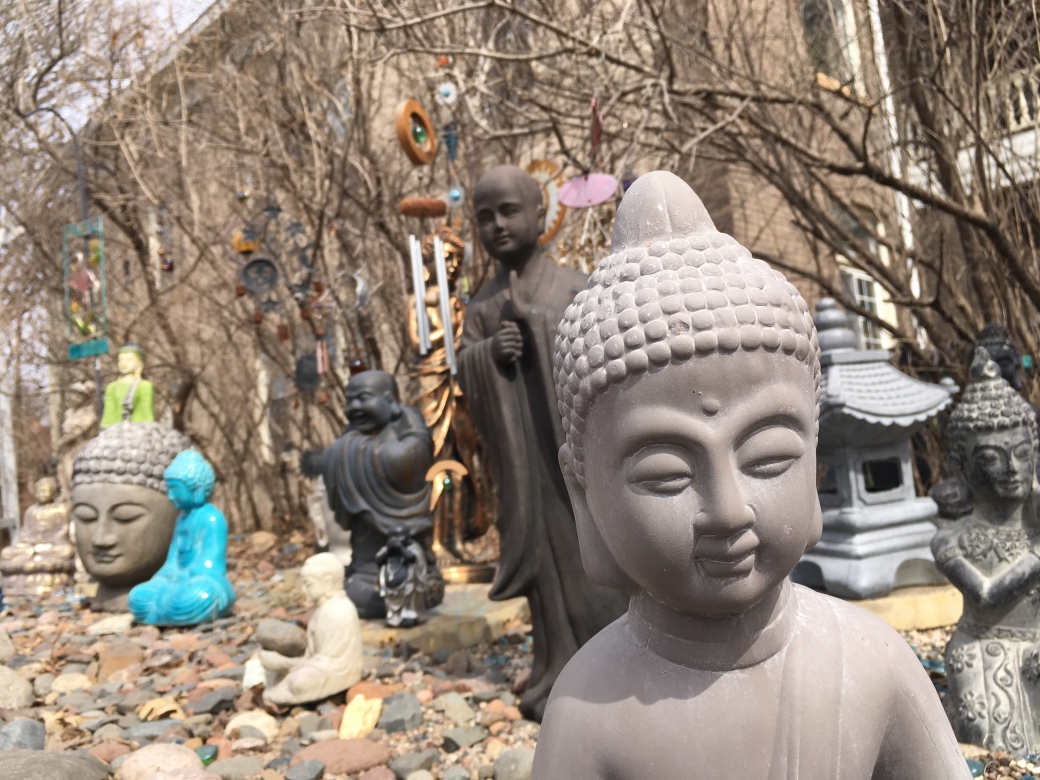 As a letter carrier, I get paid to walk in circles.  It is not such a horrible thing to stroll through the same neighborhood every day, although the job does get dull and the weather is sometimes horrible.  Like any walker, I note the banal passage of the seasons.  I had forgotten this collection of Buddha sculptures in Prospect Park (pictured above) even existed under the thick blanket of last year’s snow.  The splendor of autumn has passed with the inevitable return of the white stuff yet to arrive.  Right now the tree line is denuded and skeletal, just a bit of rust still stubbornly clinging to the gnarled oaks.  It’s a time of year–what with a long, frigid winter and a mountain of packages just ahead–that often finds me depressed.

I left my route in Prospect Park ten months ago for a flatter one along 8th Street.  Hills and steps in combination with ice are something to be avoided.  I deliver to fewer college professors now and more students.  My new territory is more urban and dismal by comparison.

The city waterworks building on 9th Street and 5th Avenue–a handsome brick structure built in 1898–offers some industrial charm.  But I miss the wildlife and the architectural variety of the Prospect Park neighborhood.  Overlooking the Mississippi River, it was commonplace to see bald eagles and turkeys.  Once, I even spotted a pileated woodpecker hammering away at a tree trunk on Arthur Avenue.  My new route is also eerily childless.  I enjoyed delivering mail to the Pratt School every day, the babble of all those kids at recess under the Witches Hat tower.  The play of children is like birdsong, something you miss without always knowing what is missing.

These days, about the only birds I see are crows cawing overhead.  It can be a lonely job.  A vague figure with my blue uniform and satchel, my days pass mostly in silence.  I don’t talk to many people.  It is almost a form of disappearing as I become the route, unnoticed, like a fire hydrant or a mailbox.  As a letter carrier, I notice the mailboxes perhaps more than the houses.  They come in all styles.  Many have broken lids.  People seem to be reluctant to purchase new ones.  Most of the residences are rentals, which probably accounts for the shabby mailboxes.

These particular ones look like they took a load of buckshot to the belly.  Someone put their Halloween decorations out late.  I expect to see them long after Thanksgiving.  The ugly bastard creeps me out.  His rubber hand waves at me when I open the boxes, and I’m always tempted to stuff the mail inside his gory hole.

In the foyer of an apartment building just down the block, someone has posted a comical, yet touchingly empathetic, obituary for their deceased pet:

“Morty passed away Sunday morning in the rat food dish I made out of an old Bremer Lasagna tray.  He had a carrot in his mouth.  I think he choked to death or his heart gave out.  He was a good rat.  Morty was sick his whole life.  As soon as he was big enough, he put a stop to Rick humping him.  [ . . . ]  Morty will be missed.  He left behind a human family member and his brother, Rick.”

Death seem to be everywhere, a shadow I can’t run away from because it is my own.  Across the street in a condominium complex, a woman was murdered back in the Seventies.  Lenny Sherman, the senior carrier in the entire city, provided this information.  He explained to me how, back in the day, the police always asked for the victim’s mail, thinking it might hold some possible clue.  Maybe they still do that.  Although, with smartphones tracking our every impulse, maybe they don’t even bother.  He recalled handing the policeman the dead woman’s mail and the black rotary telephone inside the squad car.  Lenny is as old-school as they come. These people complain more about delivering their routes than I did when I got drafted!” he bellows when there are a lot of sick calls.  Lenny will retire before long and it will be up to me to remember where the bodies are buried.  The woman at 333 8th Street was strangled by some obsessed coworker.  It was the first case tried in Minnesota using DNA evidence.  As the slow wheels of justice turned, the DNA had degraded so the perpetrator walked.  I’ve been unable to find anything about the case on the internet, but if Lenny says something happened, you can bet your ass it did.

Sadly, there was a another murder on my route quite recently.  On October 16th, a man was found mortally assaulted around five in the morning at the corner of 7th Street and 6th Avenue.  He was transported to a nearby hospital where he died from a stab wound.  Days later, a memorial of flowers appeared on the corner by this telephone pole.  “REST IN POWER ABDOULAYE,” a hand-printed sign reads, a heart drawn under the words. 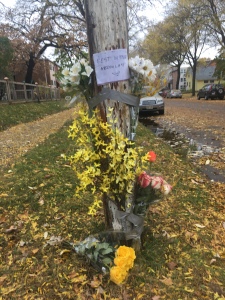 After the murder happened, I told my fellow carriers about it.  “Hey, did you hear about the murder on my route?”  That sort of thing.  Bragging a little, I would relate the basic facts.  We all agreed you wouldn’t expect that sort of thing in that neighborhood.  But at night anything can happen.  Wrong place at the wrong time in any major-American city.

People watch the news and crime becomes a form of entertainment, that human train wreck we can’t turn our eyes away from.  “If it bleeds it leads,” so the cliché goes.  I doubt any subject has inspired more books than murder, with over a thousand titles on Jack the Ripper alone available on Amazon.  I’ve read my share of true-crime books.  I’ve always been fascinated by evil.  Reading those sorts of books has always been a guilty pleasure, an unwholesome place to put my mind.

As a boy, I liked the Sherlock Holmes mysteries.  Those stories, so rich in atmosphere, are literary masterpieces–classics for a reason.  Sir Arthur Conan Doyle invited every school kid who checked out one of his books from the library to join the “Baker Street Irregulars.”  I mention this because, shortly after the Abdoulaye slaying, I began noticing a peculiar man on my route, either walking hurriedly to his apartment from the direction of campus or getting on a bus.  He wagged a red-tipped, blindman’s cane in front of him, but what made him seem odd, mostly, was his hat.  It was not something like a Sherlock Holmes hat, but rather it was a Sherlock Holmes hat—plaid with a bill front and back, and a bit of a doohickey on top.  If anyone could solve Abdoulaye’s murder it was this man!  I became curious about this Sherlock, unsure if he was a simpleton, a genius, or a combination of both.  Of course, I left him alone.  I’m not setting any fashion trends out there myself.

As a child immersed in Doyle’s foggy, London streets, I was both amused and romanced by Holmes’ seediness.  He was an opium addict, after all, who routinely bribed street urchins to come visit his flat.  Perhaps, even as a boy turning the pages by flashlight, I possessed a mind prone to the gutter.  Yet, Sherlock Holmes, as the adoring narrator, Dr. Watson, described him, was abhorrent of love and all emotions.  He was “the most perfect reasoning and observing machine that the world has seen.”  Later, in A Scandal in Bohemia, Holmes explains to Watson the distinction between mere sight and observation.  It is the only specific passage, so many decades later, that I concretely remember from those stories:

“You see, but you do not observe.  The distinction is clear.  For example, you have frequently seen the steps which lead up from the hall to this room.”

“Well, some hundreds of times.”

“Then how many are there?”

“Quite so!  You have not observed.  And yet you have seen.  That is just my point.  Now, I know that there are seventeen steps, because I have both seen and observed.”

Surely, a blind man would know the precise number of steps leading to his room.  Perhaps this simple irony explains the strange man’s eccentricity. These minor mysteries tend to reveal themselves in time and, eventually, his circle will cross my own.

Each day my eyes are drawn to the plastic flowers duct-taped to the telephone pole.  Abdoulaye’s memorial changes subtly as the weeks go by.  The white daisies and lilies disappear while the yellow roses on the ground dry and turn a dull mustard color.  A pair of solar-powered, crescent-shaped lights are added along with an American flag.  In time, snow buries the yellow roses.

I see Abdoulaye’s memorial, but I do not observe it.

Guilt and curiosity nag at me until, one evening, I search the internet for news about the murder.  The case remains unsolved, which comes as no surprise.  After 48 hours these random cases of street violence become as cold as a Minnesota winter.  I scroll and click until I discover a human face and a last name.  Abdoulaye Cisse.  I learn that the deceased was a serving member of the Minnesota National Guard.  That he was born in America.  In addition to English, Abdoulaye spoke fluent “French, Mandarin Chinese and Wolof—one of the national languages of his parents’ native Senegal.”  Thanks to the superb Star Tribune article written by Libor Jany, I come to appreciate Abdoulaye Cisse as someone more than a statistic and a stereotype.  Abdoulaye had made “plans to attend the Defense Language Institute, the military’s premier language school, in Monterey, California, to train as a human intelligence collector.”

Abdoulaye Cisse was a loved person by his family and friends.  He failed to encounter any “human intelligence” in the early-morning hours of October 16th. He lived his life in a circle, dying on his 27th birthday in the hospital he was born.