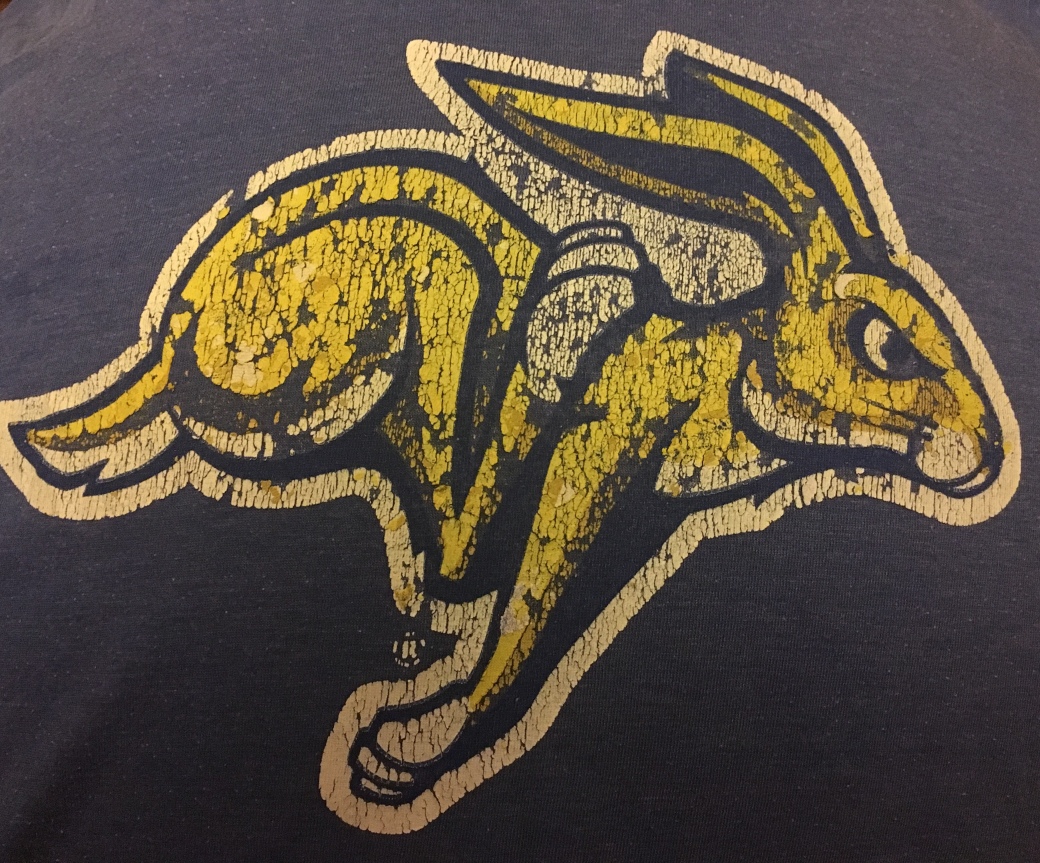 I remember the day my father dropped me off at college.  I was eighteen years old.  I gazed into the mirror after he had gone and said aloud to my reflection, “You’re never going to make it here.”

The room was spartan with concrete walls, a bunk, a dresser and a desk on each side with a window centered opposite the door.  This was supposed to be freedom.  I was finally getting away from my parents.  But the dorm room seemed to me more like a jail cell.  I was uncomfortable with the idea of sharing such a small space with a stranger.  I had never had many friends.  I was starting over and I knew I did not have the social skills to do so.

I took a deep breath and unzipped my cheap suitcase that was lying atop the bare mattress.  I transferred my clothing to the dresser, made the bed and put the empty suitcase underneath it.  I looked around.  My quilt at least added some color to the drab room.  I didn’t have any posters to put on the walls.  The only personal belongings I brought along were a clock radio and a couple of books.  I barely knew how to live.  I went to the window and looked out at the spacious expanse of blue sky.  Down below, a few people were playing volleyball while others reclined on blankets that had been laid out on the grass.  I longed to be out there with them in the sunlight.  Life came so easily to some people, or so I supposed.  The girls chased after the volleyball in their bikini-tops, giggling as the ball splashed in the sand.  The boys all played shirtless.  My own body was detestable to me.  I felt a mixture of jealousy and sadness as I watched them all so seemingly unburdened by self-awareness.

It wasn’t long before my roommate arrived.  His name was Clayton.  He was a football player from a little town in Iowa where they played both sides of the ball.  He sat across from me rubbing his knuckles with an intense look in his eyes as he related his gridiron exploits.  His own coach had declared him the dirtiest player he had ever encountered.  Clayton explained how during scrimmages he would grab the facemask of a teammate with one hand while he uppercut him with the other.  He had brought his high school sweetheart along to college.  They had their whole lives planned.  She was going to be a nurse and he was going to be a gym teacher.  They weren’t engaged yet, but they were engaged to be engaged.  He bragged that she was the most beautiful girl in town, maybe even the whole county.  I did my best to seem impressed.  I had never had a girlfriend myself.  I could see the wheels turning behind Clayton’s eyes when he met me.  I was not someone he was going to let sit at his lunch table.

I departed for class the next morning with a backpack slung over my shoulder.  Out in front of the dormitory, guys in cowboy hats were lassoing passing coeds.  This wasn’t my preconceived idea of what college would be like.  South Dakota State University had a rodeo team and I had inadvertently picked the dormitory that housed most of them.  I had never visited the campus or bothered researching anything.  The other state school had a lot of fraternities, so I had tried to avoid that.  At that age, decisions tended to overwhelm me, so I just dove into things instinctually.  But the campus was shaded and the girls pretty.  The older buildings had a charm to them.  I flowed with the others–a bustle of colored backpacks in the dappled sunlight–and at times it seemed like I belonged there.

I went on long walks in the evenings and hid out in the library.  There was an area over by the World Literature section that was remote and quiet.  I liked to wander the stacks and see which of the titles jumped out at me.  I started out on Kafka and graduated to the Russians.  None of it was good for me.  I read story after story of alienation, miserable characters wallowing in poverty and loneliness.  They encouraged all my worst inclinations.  The romantic idea of being a writer began to take shape in my mind.  I wanted to cloister myself from the world inside a garret while the snow danced outside in the glow of a streetlamp.

Living conditions inside my dormitory quickly became intolerable.  Clayton and I hardly spoke to one another.  He was gone a lot, off lifting weights or with his girlfriend.  Every weekend the kids tore the place up.  There were rules prohibiting alcohol consumption in the dorms, but they weren’t enforced.  One morning I entered the bathroom and there was blood everywhere like a murder scene.  Some drunken idiot had cut his foot the night before.  Down the hall, a pair of guys liked to host nightly drinking parties.  I absolutely hated them.  The door of their room was covered in cartoons taken from pornographic magazines.  They drank prodigious amounts of the cheapest fermented swill they could find.  I was sure they would flunk out within a semester, but I didn’t feel I could wait that long.  They were depriving me of much needed sleep.  College was far more difficult than I had anticipated.  I had always gotten A’s in high school without studying.  Now it seemed to be all I did and I was still struggling.

One night I was awakened by the country hit, “You and Me Go Fishing in the Dark.”  I looked at the red numerals on my clock radio.  It was two in the morning.  I pressed my pillow around my ears waiting for it to be over.  When the song ended, it simply began again.  My eardrums ached.  The insipid lyrics filled my mind.  Having had enough, I put on a pair of pants, marched down the hall and pounded on the door.  My heart raced as I stared at the grotesque collage of over-sized privates.  Finally, someone wearing a John Deere baseball cap answered.  His eyes were bloodshot and stupid.  He grinned at me as he stood there teetering with inebriation.  I angrily demanded he turn off the music.  He didn’t say anything right away.  I could hear the others snicker behind him.  He invited me inside.  I stepped into the room and looked around.  A half-dozen people were holding silver cans of beer in their hands.  Someone offered me one and I turned it down.  A centerfold was taped to the door of a minifridge.  My eyes went from the image of a woman’s parted legs to the two girls sitting on the couch.  Overcome with embarrassment, I excused myself and returned to my room.

One night later in the week, the song began again.  They would shut it off and then play it again an hour later like some form of aural warfare.  I knew the song was played now for my benefit.  I had started a feud.  I was a prisoner of the world’s stupidity and there was little hope for parole or escape.

I awoke terrified to a darkened room.  I had been attacked in a dream by some monster with a face like a burn victim.  Just then the door burst open and someone with a rubber mask was shoved inside.  He came at me groaning and lurching.  I pushed him away and yelled for him to get out.  I looked at the gallery of laughing hooligans in the light of the doorway.  I had become a subject of mockery.  I went to the door, slammed it shut and turned the deadbolt.  The next morning Clayton was excited to see me.  I had finally done something to earn his respect.  It seemed that the first time the masked person had come into the room I had woken up and punched him.  I had no memory of it.  It had been one of the porno guys from down the hall.  “He’s got a black-eye,” Clayton informed me.  “You really got him a good one.”  Everyone was talking about it and I felt a certain measure of pride.

A month later they were gone.  The guy I punched got sent to Iraq.  I smiled malevolently when Clayton told me.  The hardship that awaited him in that desert seemed to me a just form of hell.  His roommate got booted out of school.  That solved one problem, but I still didn’t fit in and Clayton was really getting sick of me.  I happened to meet someone from my high school in one of my classes and we became friends.  Bill was a quiet non-conformist like me.  He wore steel-rimmed glasses and stared at the ground when he walked.  He spent his free-time reading science-fiction novels by writers like L. Ron Hubbard and Robert Heinlein.  His roommate was an odd Norwegian who subsisted on Squirt and canned herring.  Bill was always complaining about having to pick up after the guy.  The fish tins used to stink something awful.  A stroke of luck would have it that our roommates were acquainted.  With my blessing, Clayton arranged a swap with Student Housing.  I was thrilled.  My new dorm housed mostly engineering students who studied all the time and tended to be uncool as well.  I was less lonely and things got easier.

I woke up one morning and turned on the television.  My campus was on every network channel.  Unbeknownst to me, there had been a riot the night before.  It was the Hobo Day Homecoming weekend and the partying had gotten out of hand.  Following a 31-nothing drubbing of the football team, an angry mob of one thousand shut down a major street with two-story bonfires fueled by whatever would burn—mattresses, picnic tables and even a doghouse.  Rampaging youth pelted authorities attempting to quell the carnage with eggs and beer bottles.  By the end of the night, 40,000 dollars’ worth of property had been destroyed, including most notably the station wagon of a local news station.  CNN claimed our town had set a per capita record for alcohol sales in a twenty-four-hour period.  After breakfast, I wandered the streets and surveyed the devastation.  Lamp posts were bent over and windows smashed with beer cans scattered everywhere.  Inspecting the blackened springs of immolated furniture, I felt like I was in a war zone.  Reports said that tear gas had even been used.  I felt satisfaction at my university’s shame.  There had been no political motivation for any of it, just a bunch of spoiled white-kids carried away by frat-boy barbarism.  You couldn’t change the world.  You could only laugh at it.  I was beginning to feel better about myself.

As back to school time rolls around this story always generates some traffic. Thanks for reading. My memoir, City of Crows, will be published by Running Wild Press in 2024. In the meantime, party safe.