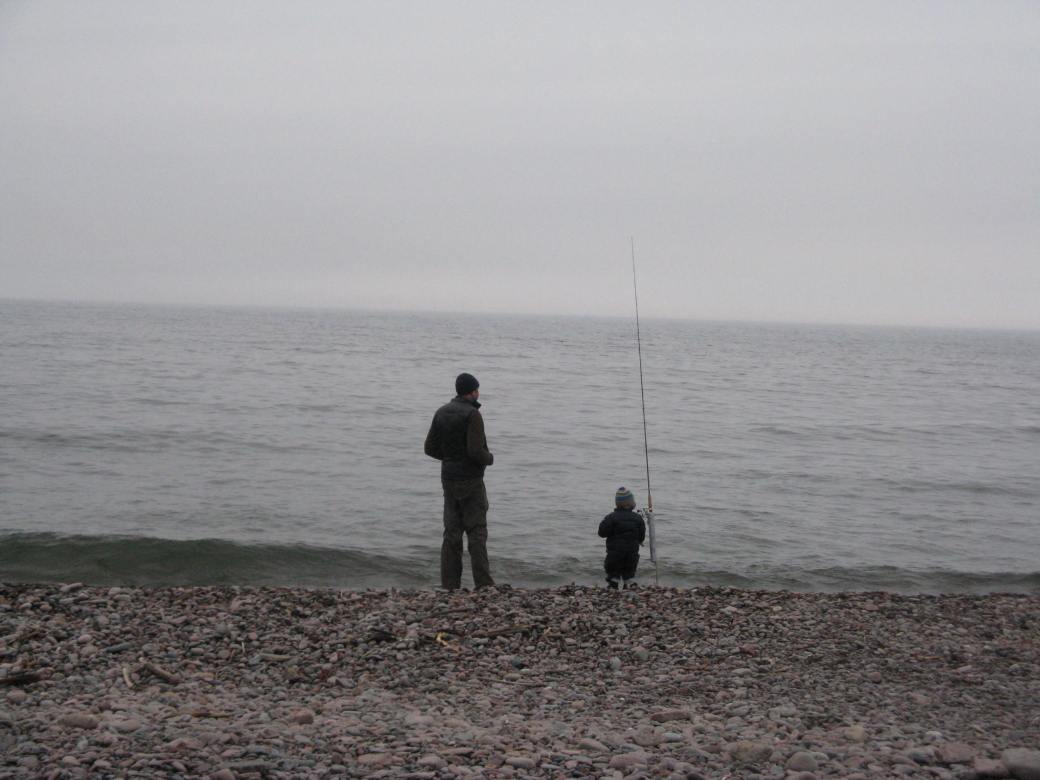 Gripping our rods and a bucket, I held back some bushes for my six-year-old son so he could go on ahead of me.  To my left, I noticed the sleeping bag underneath the bridge.  At the opening, where the head should have been, I saw a pair of red Converse All-Stars.  A dirt bike lay on its side a few feet away.  The person, an adolescent I presumed, must have been cold.  It was, I will admit, a jarring and unwelcome sight.  Like most people, I feel a mixture of anger and guilt when it comes to the homeless.  My son seemed utterly oblivious, mesmerized by the sparkling waters of Minnehaha Creek which flowed around a bend of cattails toward the Mississippi River.  I asked him if he might rather fish the nearby dock on Lake Hiawatha, but he stubbornly refused.

“No, I want to fish the secret spot,” the boy insisted.

My gaze returned to the slumbering vagrant who had not moved.  I wondered if he was awake and listening to us.  I considered the possibility that the person might be dead or need medical assistance.  Certainly, whoever it was needed some counseling, but I didn’t see what good dialing 911 would do.  It seemed the best course of action was to simply leave him alone.  My primary concern was my son’s wellbeing and I didn’t want to have this special moment between us spoiled by some drug-addicted interloper.  There were small encampments in many of the wooded parks around my home.  I had discovered them exploring on makeshift mountain bike trails that threaded their way through the twisted elms:  soiled bedding, tarps and trash bags fashioned into pup tents, furniture with the stuffing and springs sticking out, the blackened embers of abandoned fires scattered with liquor and mouthwash bottles.

I enjoyed great freedom in my youth, epic Huck Finn adventures that my parents knew nothing about.  I wanted that for my boy, but I was raising him in a different time and place.  We had many “secret spots” known only to us where we fished alone and undisturbed.  I had always been gently persistent about the pastime.  It was, along with the hunting, the best thing my own father and I ever did together.  I knew it could get boring if the fish weren’t cooperating.  I never forced it on him.  If he wasn’t in the mood, we just didn’t go.  It was important to me that he like it, which is why I suppose he did.  He wanted to please me as all sons do their fathers.  We took a delight in each other’s happiness.

I rigged my son’s line simply with a gold hook, a piece of shot and a red-and-white bobber.  I baited him up with a waxworm I had purchased from a nearby pet store and let it fly into the current.  I could see panfish darting about in the pool.  I quickly hooked one and handed the pole off to the boy, so he could reel it in.  He held it aloft for us both to admire.  It was dark green with squiggles of orange and electric blue.  I unhooked the fish unharmed and let the boy toss it back into the flowing water.  We exchanged a smile.

“Where does the water go?” I asked my son.

He always hesitated before answering.  “The Mississippi River?”

Every so often I glanced behind me to the dim recess under the bridge.  The figure never stirred or groaned.  What if he was dead?  Not much helping him then, I supposed.  It was getting hot.  I wondered how well anyone could breathe like that.  Occasionally someone would jog or bicycle over the bridge.  These were the beautiful people–well-tanned with a sheen of vitality, blissfully unaware of the homeless individual in a virtual body-bag below them.

The dirt bike made me suspect the individual to be some troubled runaway.  I thought of the pictures of missing youth on the junk mail I delivered, kids they used to put on milk cartons.  I reconsidered phoning the police, but I couldn’t bring myself to have someone rousted from their hangover by an overzealous cop.  Better to let him sleep.  I figured he wanted to be left alone, and it was a public park after all.

I imagined a boy very much like the boys I grew up with in the trailer court.  It was funny to think I had somehow gotten so old that kids were now wearing shoes that I had worn as a child, shoes I started wearing again just to seem hip.  The footwear, a hallmark of grunge fashion, reminded me of Kurt Cobain’s song, “Something in the Way.”  I could hear the dirge playing in my head—two chords tuned down real low:

The tarp has sprung a leak.

And the animals I’ve trapped

Have all become my pets.

And I’m living off of grass

And the drippings from the ceiling.

But it’s okay to eat fish,

Cause they don’t have any feelings.”

It was then, peering into the gravel bottom of the pool, that I noticed the roving silhouette of a big bass.  I could sense his dominance over the other fish as he circled about—husky, his eye darkly alert for prey, twitching his head about with that thick, upturned bottom lip.  I whispered and pointed for the boy who, at last, saw it too.  We crouched, sharing each other’s excitement.  Completely in the moment, the homeless person vanished from my conscience entirely.  The boy handed the rod to me.  I could see the bass come to rest at a spot near the opposite bank.  There was a flash of light and I could see him opening his mouth to feed on something.  It was worth a try.  I cast the waxworm upstream from him and let it drift.  The bobber did not go under and I could not feel him, but I saw him take the bait, so I set the hook.

He exploded out of the water twice before I passed the rod back to the boy who was so excited he nearly fell into the creek.  I yelled coaching instruction to him as the bass zipped back and forth in the pool.

He had the fish close.  I grabbed the line and pulled him in a bit closer before scooping him up in the wood-handled fly-fishing net I had brought along.  He was a fat one, a real beauty, mouthing the air as he looked up at me helplessly with an eye like a wet black stone.

“We should get him back in the water,” I said to my son after he had a chance to admire the bass.  He touched the cool slime of the fish’s scales with his finger.

“All right,” I relented.  I felt bad about it, but the fish would make for a nice lunch.  I bent down to dip the bucket into the water.

“Should we get him home then?” I asked.

He nodded.  It was always best to quit when we were ahead on these sorts of outings.  As we departed the bridge, the boy froze up as he saw the sleeping bag.

“Looks like someone’s camping,” I said, nudging him forward.  “Don’t worry about it.”

We drove home and he proudly displayed the fish to his mother.  When I took a picture, he was barely strong enough to hold it up.  It really was a nice fish.  I let the boy watch me as I filleted it on the picnic table, slitting open the fish’s stomach and showing him the minnows and crayfish inside as my own father had done.  I fried the fish and ate it for lunch that day with a salad I picked from the garden.  I tried to get the boy to try some, but he just turned his head away.  He’d always been picky like his mother.

That evening, I went for a run on the bike trail and checked under the bridge where we had been fishing.  Kurt Cobain and his sleeping bag were gone along with the bike.  I replayed the morning in my head as I continued my jog, wishing I had been able to help the boy who was not my son.  I’ve been through dark times in my life, periods of depression when I was young I don’t talk or even write about much.  I saw myself underneath that bridge.  And that reflection made me turn away.

For me fishing is a form of time travel.  Through some transmutation I became the boy–the father and the son.  It is as if, by getting it right in these moments, that I am repairing my own broken childhood. 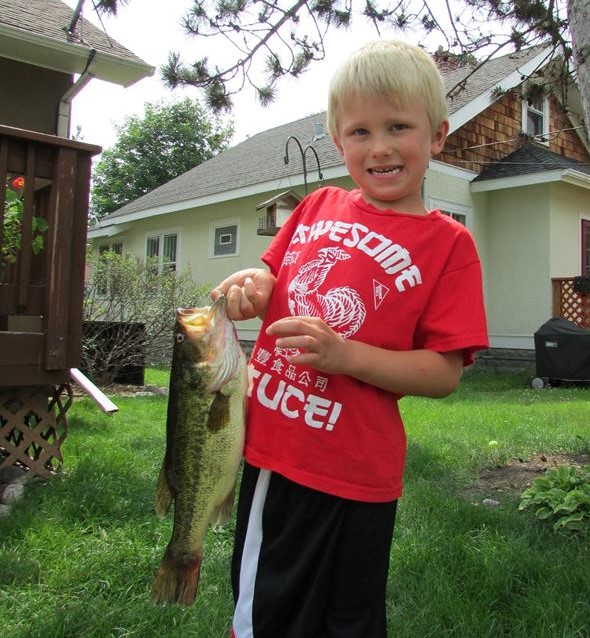