There are many acts of parenting performed out of societal pressure (circumcision, vaccinations, dental examinations, public school) that, given your offspring’s reaction, seem like abuse.  Not the least of these is placing your child on the lap of the department store Santa.

That was the result.  A toddler betrayed by his caregivers, screaming in absolute terror.  You take the picture in situations like this and then pretend it never happened.

“Well, we’re never doing that again,” my lovely wife said to me in the garishly lit Mall of America.  I could barely hear her above the din of Christmas music with the air so aromatic with sugar that the simple act of breathing heightened our risk for diabetes.

I stroked the back of my son’s head as he clung tenaciously to his mother’s sweater-covered bosom.   His face gradually returned to its normal shade and we moved toward the escalators to continue our shopping odyssey.  I took one last accusatory look back at Santa.  His sparkling eyes seemed to meet mine over his spectacles for a moment and I turned away feeling a queer mixture of shame and fear.  Who was this strange man flanked by elves and why was I so angry with him?  Why was I so disturbed by the realism of his contrivance—the red suit, his potbelly and lustrous curls?  I looked to the waiting queue of children–diverse as the United Colors of Benetton—searching for an answer, but finding only guilt.  Why couldn’t I believe like all these loving mommies?  Why was I so rotten and unable to love? Fuck you, Santa!, I thought.  Then I escorted my wife to Sears so my kid could look at lawn mowers. 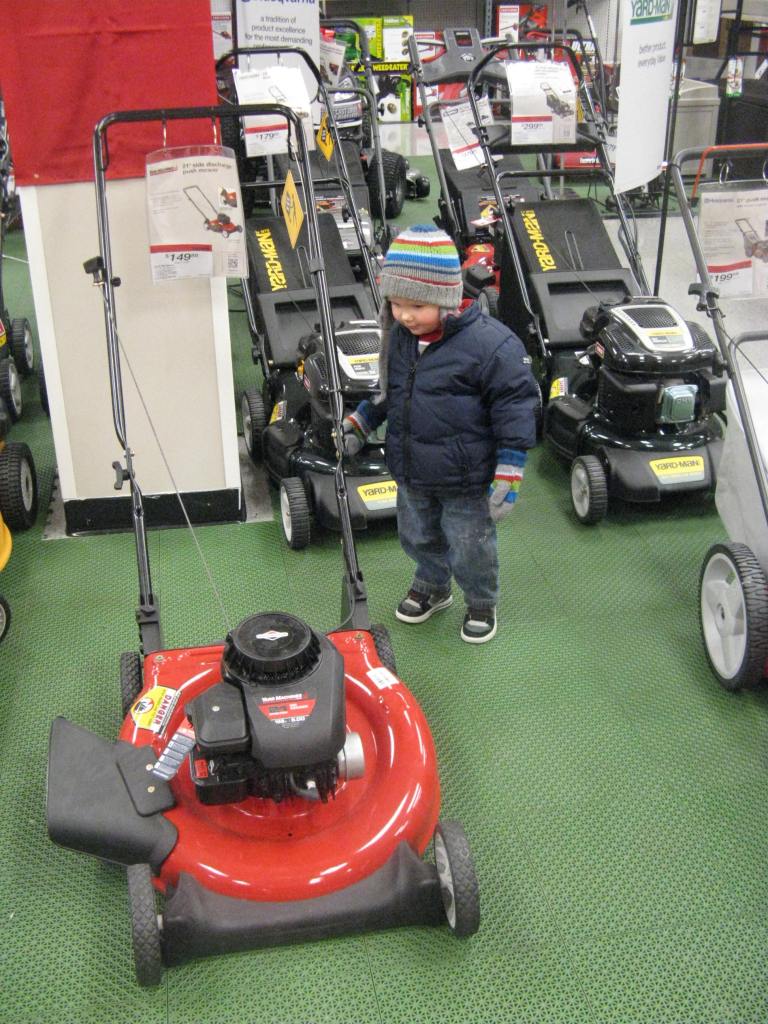 One of our earliest parenting arguments had been over Santa Claus.  She was pregnant with our first at the time.  I expressed a preference that we not tell the child Santa Claus was real.  When pressed as to why, I simply responded that I didn’t believe in lying to my child if I could help it.  The argument went back and forth—a matter which surprised us both since we were so often in agreement in matters of religion—until I caved to her maternal viewpoint.  The boy is seven now.  A few months ago, he asked his mother to verify what for a while he had suspected—that the whole Santa thing was, in fact, a sham.  He seemed satisfied when she confirmed what he knew already.  She cautioned him not to tell his brother which, of course, he immediately did.  Fortunately, our three-year-old is prone to disregard his older sibling.  I read Yes, Virginia, There is a Santa Claus to him recently, finding it to be a surprisingly profound book that left me feeling humble and doubting of my own lack of wonder.  I asked my little boy why he liked Santa Claus.  He looked at the twinkling tree and answered simply, “because Santa brings presents.”

I haven’t the heart to tell him it is really the mailman who brings the presents.  Some day he will appreciate me, but I have no idea when that might happen.  The eleven-hour days I have been working in the cold of Minnesota have done little to enhance my Christmas cheer.

I have a real-life Santa living on my postal route.  He goes by the name Hippie Harry.  You can no doubt guess his appearance—paunchy and old, a full white beard and jolly countenance.  I most frequently see him at the picnic table in his front yard.  He sits there in the shade of the white pines, drinking prodigious amounts of Pabst Blue Ribbon—the same brand favored by my deceased father.  He always offers me one and I always decline, making the same joke about government drones that never fails to make him laugh.  Rabbits, woodpeckers and other fauna populate his yard in a way that reminds me of a Disney movie.  Occasionally, he has a drinking buddy over.  They are usually Vietnam vets.  Having coexisted with my father in a trailer home for eighteen years, I can spot them in an instant.  I always recognize them by age, a certain bearing of superiority and paranoia.  So many decades later something remains of that ten-yard stare.

Having walked across his property so many times, Harry trusted me enough to confide that he spent a year in federal prison.  I knew that he was a former Transportation Security Administration employee.  I always figured he had been locked up on some drug charge, that maybe he got busted smuggling some marijuana aboard his carry-on.  As a former federal employee and prisoner, he always understood my complaints about the post office, an institution where everyone is just a number.

Finally, I mustered the courage to ask him directly why he been sent to prison.  He informed me that he had been convicted of assaulting an elderly Somali gentleman while on the job.

I had gathered from previous conversation that Harry did not like Somalis, not the most unusual of prejudices in Minneapolis or anywhere else in post-9/11 America.  In justifying his crime, he explained how he had been mugged by members of the ethnic group on three occasions when he lived in the Cedar-Riverside neighborhood.  I imagined him an easy target as he staggered home from the bars in those days.  He claimed he and the airport victim only exchanged words.  I was inclined to doubt him, but I was grateful for his sharing.  I asked him about prison.  He described how the guards chastised him for saying “thank you” whenever he was given something or addressed.  This polite utterance violated some code of prison protocol.  Prisoners and guards were not to regard each other as human by the sound of it.  It became his form of rebellion.  “Hippie Harry always says thank you,” he would nervously tell them.

Harry seems happy now.  He has a modest home and enough money to get by.  With the assistance of a lawyer he was able to hang on to his government pension.

One day, just before the infamous 2016 election, Harry asked me who I thought might win. I curtly responded that federal law forbid me from discussing politics while in uniform, which of course didn’t stop Harry from sharing his views.

“I figure Trump is a lock,” he told me pointedly, seeming very pleased.

“No one likes Hillary,” he said, “and a lot of people hate the Muslims.  Most of the people who are going to vote for Trump won’t admit it to anyone.  I don’t see how he can lose.”

And then it happened.  I watched a black shadow fall across the nation as he won one state he wasn’t supposed to win after another.  I thought of Hippie Harry, gleeful and intoxicated, somehow possessed with a better understanding of the American electoral psyche than PBS’s own David Brooks.

Yes, Virginia.  There is a Santa Claus and he voted for Donald Trump!  The point I make here is that you never really know who it is inside the Santa suit, but the funny red hat should be some kind of tip-off.  I had just passed his house the other day when I saw him trudge out to his mailbox in sagging red pants and black boots.

He called out to me hoarsely across the stillness of snow-covered yards, “Justin, Merry Christmas!!!”

I waved back to him as evening descended, miles to go and no reindeer to guide me.

Author’s note:  as is the case in all my creative nonfiction, the names of characters other than myself have been changed.